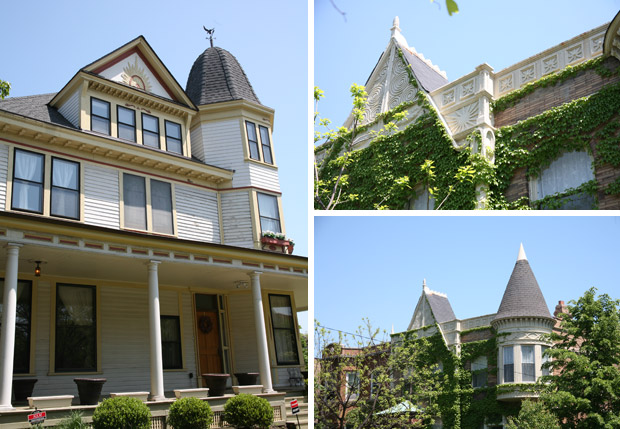 This may be the archetype style of Victorian homes. Popularized by a number of English architects, and in particular Richard Norman Shaw, this style can be found in every area of the United States and it therefore defines many people’s impression of what a Victorian home is. Elaborate details abound in the tiniest nook and cranny, and with particular emphasis on the front face of the home. All manner of complications to roof lines, siding orientation, and window position, shape and size are commonplace.

It is common to have L-wraparound covered-porches on corner or larger lots, and full-front covered porches on standard lots. Various stories, dormers, bays, stairways, chimneys and balconies are typical elements, often all at once. Even a variety of materials is the norm, with pressed metal, shingles, siding, wood, metal, stained glass and more somehow peacefully coexisting. Rounded or octagonal towers are a favored feature, springing out castle-like from the home amongst the various roof line intersects.

Chicago examples often featured massive cut stone foundations. There is also a collection of wonderful brick Queen Annes in Oak Park and Logan Square and along some of the Boulevards of Chicago. This was a popular style throughout the US during the later part of the 19th century. In particular as lathes, band saws and scroll saws enabled the creation of elaborate decorations and flourishes, the style enabled easy reproduction of that which looked painstakingly made. In Chicago, it is found amongst other places in Rogers Park, Austin, Hyde Park, Lakeview and Andersonville. In San Francisco, flamboyantly painted Queen Annes known as Painted Ladies were popular enough to influence some homes in Chicago, and in some cases, have been unwisely reborn as faux-Painted Ladies.