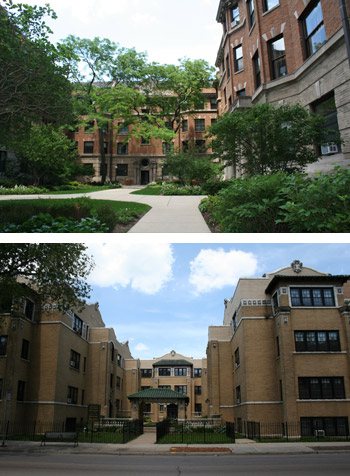 Chicago’s Courtyard Buildings came into their own in the late 19th century. Prior to this, the majority of the multi-family were built to house at most 1 to 4 families. Many of these were built in the early and middle 1870s primarily in response to the massive housing shortage following the Great Chicago Fire of 1871. Consequently, many of them were of brick construction. The Courtyard Building was essentially a graceful pairing or grouping of these brick flats, with a centralized courtyard at its center.

The courtyard occupied an important place in the life of the building’s residents. In the densely populated city, courtyards provided a smaller sense of community, and a safe are for residents to interact socially, for relaxation and for children to play in. In many of these buildings, the use of wide open spaces and landscaping helped to provide a peaceful oasis to escape the work week.