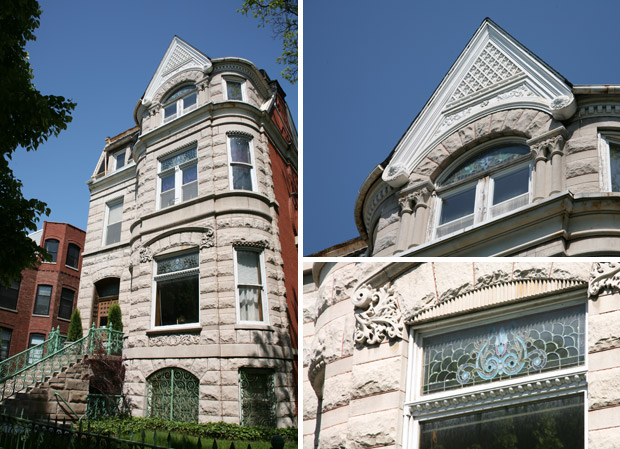 The gothic cathedrals of medieval Europe are the inspiration for this style of architecture. This style appeared in the mid-1800s. Architects such as Andrew Jackson Downing and Alexander Jackson Davis built in this style in the 1830s and in the decades following, new inventions in machinery and building technology and techniques allowed the mass production of parts used to construct homes that were simple in design, and yet grand and opulent in appearance.

In Chicago, the most prominent examples of the style are found on churches and campuses throughout the city, such as Fourth Presbyterian Church at 866 N Michigan, St. Alphonsus Roman Catholic Church at 2950 N Southport, or St. Paul’s Roman Catholic Church at 2234 S Hoyne. Another prominent example graces the gates and some of the structures within Rosehill Cemetery at 5800 N Ravenswood.

There are several examples of gothic style influencing various Chicago residential styles. A noteworthy example is the Greystone, which often borrowed elements of the grand drama of Gothic elements for their Limestone façades. Some Gothic Revivals feature arched windows, and while the most commonly thought of Gothic Revival examples are stone, simpler wooden cottages can feature gothic elements and style. Very elaborate Wooden Gothic Revival homes are called “Carpenter Gothic”, and some examples exist in some of the North coast suburbs.